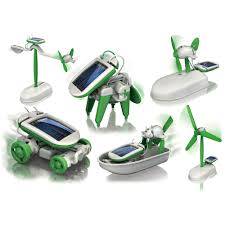 Robots That Will Keep Your Dad Happy This Father’s Day

I  can’t believe that Father’s Day is just around the corner again (18th June). It feels like only a few short months ago when I wrote the blog “15 Gifts for Father’s Day that cost less than €15 each” but it’s obviously been a year!

This year I thought I’d focus on some Robots that I stock which I think lots of dads would like to make.

These are the cheapest robots that I stock and although they won’t break the bank, there’s lots of fun that can be had with this kit. In fact, this kit is a little bit like having a transformer – you can make one of six different types of solar powered robots. When you’re tired with the first one, you can dismantle it and make another type.

This is also a very popular robot. In this kit you have everything you need to make a robot-bug (robug) from a drinks can (apart from the can itself). The Robug will scurry along the floor like a real life bug!

You may think that by buying this for your dad, the amount of house work you do will be reduced but unfortunately, I don’t think that this brush robot will reduce it that much. It will however be great fun to make and watch.

This happens to be my favourite of the robots that I stock as I think I’d enjoy colouring in the doodles that it makes (a little bit like Spirograph). Again, this robot needs to be assembled.

If you think your dad would enjoy a robot this year, that they could make and then play with when they are supposed to be doing office work, then don’t delay.

I hope you have a lovely Father’s day as you celebrate with the people you love.