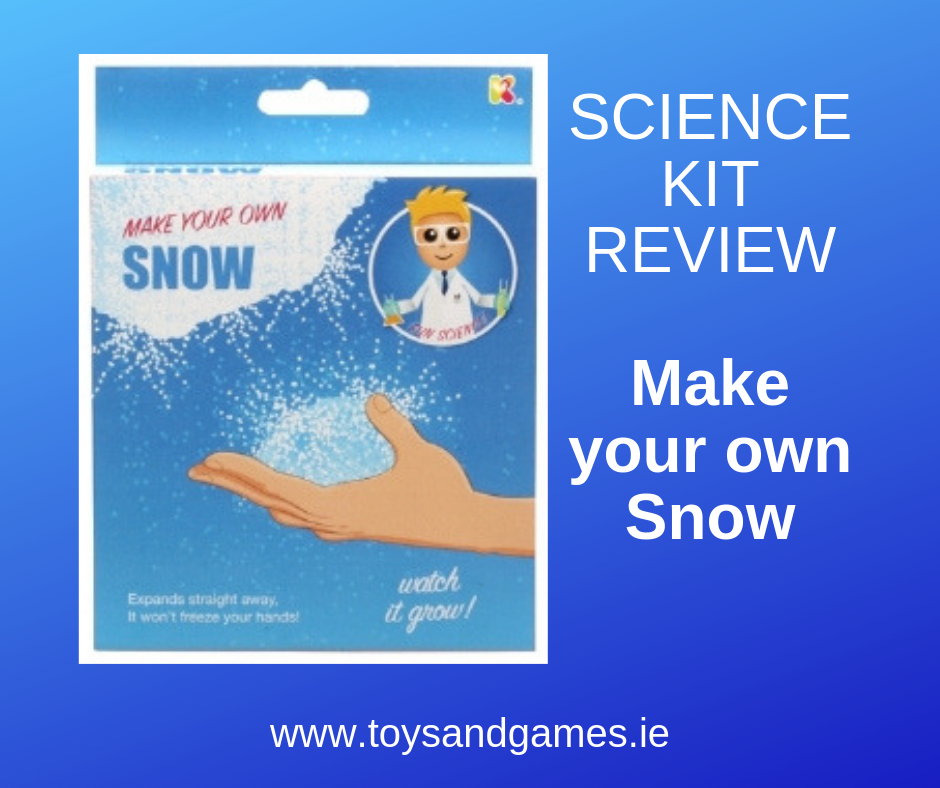 We were in London recently and were leisurely walking through a famous toy shop. My girls were drawn to a large drum of snow and a sales girl who was showing interested kids and parents how it was made. We watched and played in fascination. The girls held out their cupped hands and a teaspoon of white powder was placed in them. Then the sales girl poured about an egg cup amount of warm water and instantly the power expanded and took on a different form. It now felt and looked like snow, only it wasn’t cold and it didn’t melt. We were mesmerized and I resolved to see if I could find a similar product to sell in my little online toy shop.

Fast forward a couple of months and I have found a ‘Make your own Snow’ Kit to stock! As soon as it arrived, the girls insisted on giving it a go so we opened a box and tried it out.

The kit comes in a small box measuring approx 13 x 17cm. It’s light and the box is made out of tough cardboard. Inside is one small packet of snow crystals, a measuring teaspoon, and instructions.

Initially, we measured out one teaspoon of snow crystals and put it in an empty glass. We added a small amount of warm water and instantly the crystals transformed to ‘snow’.

Then we put a teaspoon of the crystals in our hands and added water. We got the same result. The water on the table in the picture above isn’t melted snow, it’s just a bad aim when it comes to pouring water into a child’s hand!!

We ended up making about 3 snowballs and used about a third of the packet. I reckon if I’d allowed the girls to use the whole packet, we would have made about 10 snowballs but I wanted to be able to bring this kit out another time when I won’t be taking photos and analysing every detail for a review.

We made this snow about four days ago now and the girls keep returning to it and play (similar to when we made slime).  They roll it into balls, flatten it and roll it again. Thankfully it hasn’t occurred to them to attempt to throw the snowballs at each other. However, it doesn’t appear to stick to clothes, hands or hard surfaces.

My girls love a good science experiment and have added extra water to one of the bowls to see the effect. The snow has turned into slush but they still enjoy touching it (I don’t get this fascination with touching slime or slushy textures)

It’s hard to know what exactly is in this science experiment but whatever it is must be toxic as the packet comes with lots of warnings and although it’s a very easy experiment to do, it’s recommended for ages 10+ and under adult supervision. Initially, we put our snow in a drinking glass but it has now been transferred to a bowl as I was afraid that a visitor might attempt to taste it, thinking it was a slushy or something. I guess you can never be too careful.

My girls absolutely loved this science kit and the results.

They gave it 10 out of 10. Due to the fact that I hate messy things in the house and I don’t like the idea of it being so toxic, I give it about 6 out of 10. I was also disappointed when I saw how small the bag of snow crystals was. However, once they started expanding, it proved to be enough snow to keep everyone happy!

If you would like to purchase a box for yourself, you will find it here.

Thanks for taking the time to read this review,