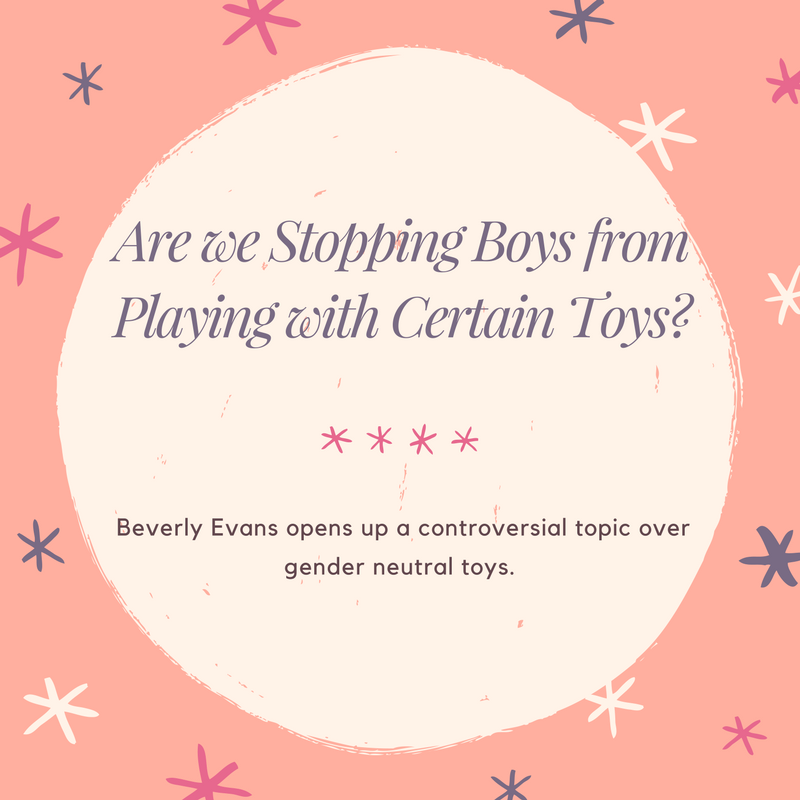 Are we Stopping Boys from Playing with Certain Toys?

I recently had a lovely conversation with my sister-in-law about boys toys and I discovered that she was passionate about gender neutral toys and how some toys are marketed just for girls. After our chat, I asked if she would put it into a blog for me. So here it is, thanks, Beverly!

He also loves pink, doing my hair, makeup and nails, dressing up, playing with dolls, pushing prams. Is that ok?

He came home from junior infants last year and told me that he didn’t like pink anymore because “it’s a girls colour”, someone had decided to “enlighten” him to this “fact”, I told him there’s no such thing as girl colours and boy colours, there are just colours and all colours are beautiful- he decided he liked pink again. But is it true? Is there no such thing as boy colours and girl colours or boy toys and girl toys? Most toy shops would lead me to believe that sadly this isn’t true. The glowing pink isle that’s full of beautiful dolls, tea sets, vacuum cleaners, washing machines- all of which my son loves but are very clearer aimed at girls.

Equally the boy’s isles mostly consist of weapons of some description or superheroes like Spider-Man and Batman which FYI my daughter loves- she’s not so fussed with cat woman and Wonder Woman. And don’t even get me started on Lego- which I adore but find the fact that they brought out a pink range Lego friends for girls the most infuriating thing! Since when is Lego gender specific, it’s bricks for goodness sake?!

So why is it that both genders can’t play with both gender superheroes, why are these superheroes in different isles, why is there now girl Lego and boy Lego ? What exactly are we afraid of? It’s not a problem for my daughter to be a tom boy and play with boys toys but when my son wanted to go out with clips in his hair I tried to dissuade him, not because he didn’t look adorable but because I was afraid of what other people would say to him. I hate myself for that because I want to raise him not to care what other people say but at the same time I don’t want to put a target on his back as life is hard enough.

Toy manufacturers have a lot to answer for but they are only doing it because it’s what sells so who can blame them. maybe if parents bought their boys a pink buggy and a baby doll and let him walk up the street pushing it, the manufacturers might start to follow suit and stop promoting gender stereotypes. I want both my children to be happy, confident leaders, not followers, as I think most parents do, so maybe we should lead by example.

Thanks, Beverly. I have spent ages trawling the internet for pictures of boys playing with dolls, prams etc but couldn’t find any that I could reuse on this blog. It says it all, doesn’t it?