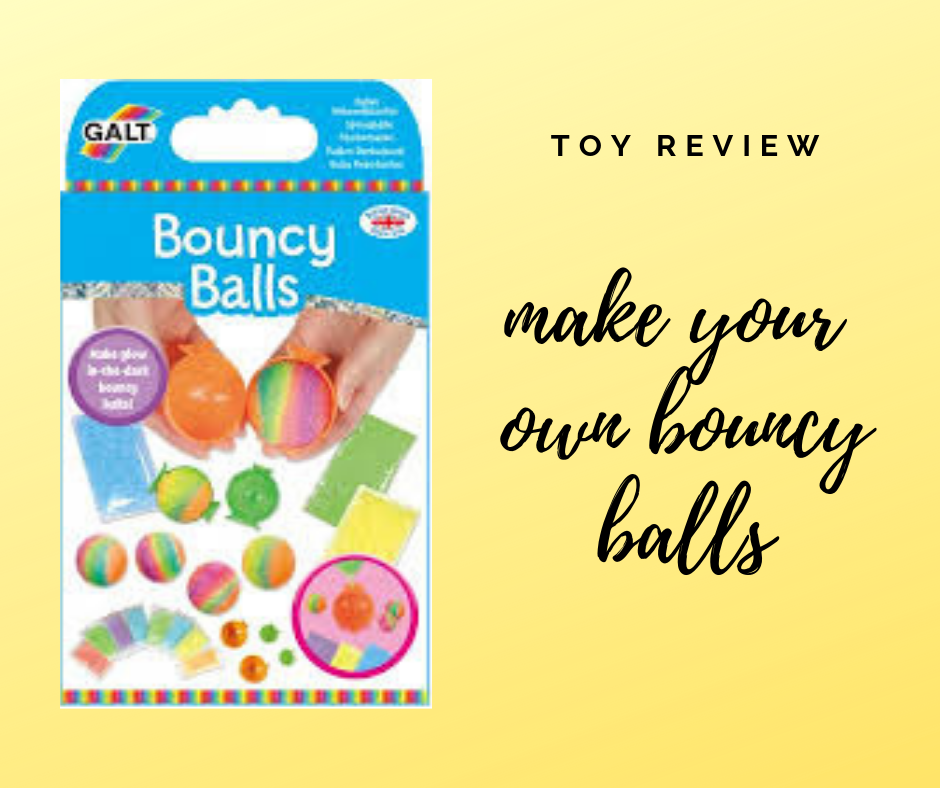 Toy Review : Make your own Glow in the Dark Bouncy Balls

** Update – this toy has been discontinued

The Easter holidays were drawing to a close. The gorgeous weather that we’d experienced earlier in the week had faded away and the girls were getting antsy playing inside. It was time for a new activity. I keep a small stash of toys or crafts I think they’d like and every now and again, I take one out to do together. That day, I choose the ‘Make your own Glow in the Dark Bouncy Balls’ kit from Galt. Their little faces lit up. They washed their hands and sat patiently at the table, planning what colours they would make each ball and who they would give them to as gifts, while I opened the box and scanned over the instructions.

The box contained eight sachets of coloured granules, two plastic moulds (one large and one small) and instructions. We could choose to make either two large bouncy balls or eight small ones. There was virtually no debate – we would make eight small ones and then more people could have them. We lifted out the small mould and clipped it together so that there was a  small hole at the top. Then we choose the colours we wanted for our first ball to be and took it in turns pouring the granules/crystals into the mould until they came to the top.

This was easy, even for little hands, and very little spilled out onto the table. Then, we immersed the filled mould into a glass of cold water and waited two minutes. I expected some of the crystals to float out, but thankfully this didn’t happen.

Once the time was up, we lifted it and let it rest for two more minutes. Then, we gently opened up the mould and pried the new ball out. We then had to hold it under running water and wait for it to dry off completely. This later stage really tested the girls’ patience as they were eager to try out the balls. Each ball took about 15 minutes to make and you can only make one at a time, so the whole activity took about an hour and a half. The girls were absolutely delighted with their rainbow balls. Initially, they didn’t glow in the dark but I think they needed to absorb sunlight. We left them on the window sill and the following evening, they were glowing!

What we liked about this activity:

We are happy to recommend this Make your own Bouncy Ball Kit.